Why You Shouldn’t Dismiss Green Light

With the new LED lighting technology for plant production and research the focus has been on developing light spectra that are a) most energy efficient and that b) produce the fastest vegetative and generative development in the plant. In that regard red and blue wavelengths have been dominating the plant growth light industry. However, leaving out the other wavebands is limiting the potential to control other aspects of gene expression and physiology in plants. The most researched of these other wavebands are far red and ultraviolet wavelengths. These wavelengths can affect plant growth and development significantly and you can read about these in our previous blog posts:

Ratios in the Light Spectrum: A Brief Overview

Lighting Approaches to Speed up the Generation Turnover

Green light (500–600 nm) has usually been dismissed because it has not been thought to bring much for the vegetative and generative growth of plants. Traditionally green light has only been thought to reflect away from the leaf surface thus creating its green color. The development towards continuous (full, wide, broad) spectrum containing also the green wavelength started with NASA space station plant production experiments where red and blue light was considered disadvantageous as the plants under it looked almost black and it was difficult to monitor plant health under these conditions (Kim et al. 2004).In a study made for space flight it was discovered that 24% addition of green light (500 to 600 nm) to red and blue LEDs (RGB treatment) enhanced lettuce growth producing more biomass than mere red and blue light (Kim et al. 2004). Having a continuous spectrum containing UVA 0,1%, Blue 12%, Green 19%, Red 61% and Far red 8% (spectrum AP673L) has continuously shown in Valoya’s internal trials that it’s superior to simple red and blue light and by extension superior to the very simple high-pressure sodium lamp (HPS) spectrum. It is also worth to mention that this spectrum is not white light, but in the development of the spectrum the amounts and the ratios (R:Fr, B:G) were designed to drive strong vegetative growth of the plants.  In a Valoya internal lettuce trial 58% more biomass was accumulated under AP673L spectrum than under a red and blue spectrum (Fig. 1).

Effects of Green Light on Plants

Even though a green light specific photoreceptor has not yet been found, it is known that green light has effects independent from the cryptochrome but then again, also cryptochrome dependent ones, just like blue light. It is known that green light in low light intensity conditions can enhance far red stimulating secondary metabolite production in microgreens and then again, counteracts in the production of these compounds in high intensity light conditions (Kim et al. 2004). In many cases green light promoted physiological changes in plants are opposite to the actions of the blue light. In the study by Kim et al. blue light induced anthocyanin accumulation was inhibited by the green light. In another study it has been found that blue light promotes stomatal opening whereas green light promotes stomatal closure (Frechilla et al. 2000). Blue light inhibits the early stem elongation in the seedling stage whereas the green light promotes it (Folta 2004). Also, blue light results in flowering induction and green light inhibits it (Banerjee et al., 2007). As you can see, green light works very closely with blue light and therefore not only the amount of these two wavelengths separately is important but also the ratio (Blue:Green) between these two in the designed spectrum.  Furthermore, green light has been found to affect the elongation of petioles and upward leaf reorientation with model plant Arabidopsis thalianaboth which are a sign of shade avoidance symptoms (Zhang et al. 2011) and also gene expression in the same plant (Dhingra et al. 2006). 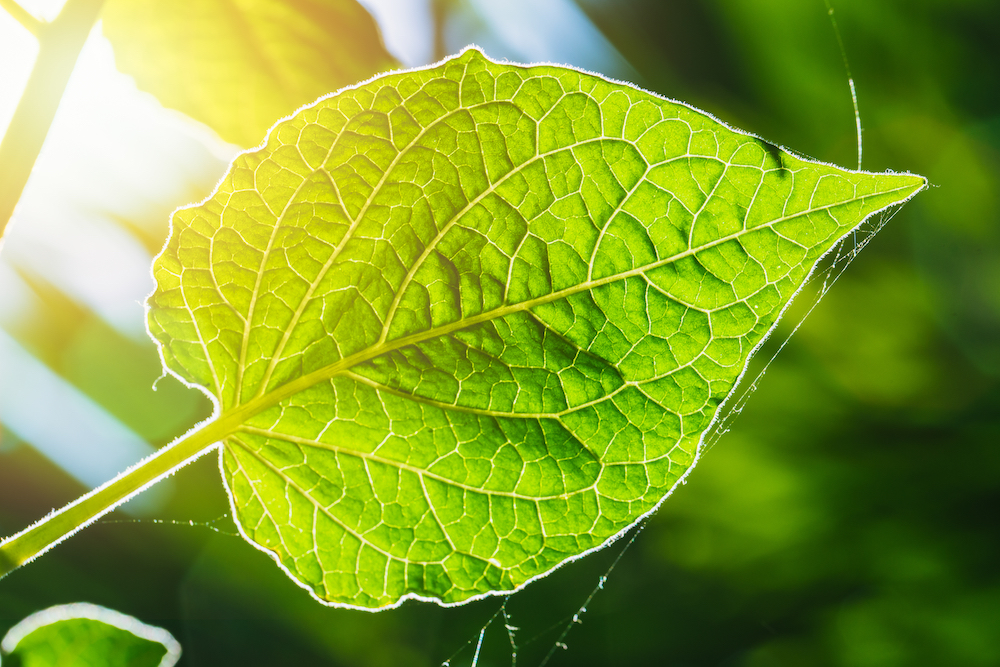 Green Photon Trickling Down Through the Canopy

As mentioned before, green light produces shade avoidance symptoms which is quite intuitive if you consider the natural conditions where the plants grow. Not all the green light is reflected from the highest canopy leaves in the nature but a lot of it (50-90%) has been estimated to penetrate the upper leaves in plant level ((Terashima et al., 2009; Nishio, 2000). For the plant growing in the understory of the forest green light is a signal for the plant of being in the shade of a bigger plant. Then again, the plants growing under unobstructed sunlight can take advantage of the green photons that can more easily penetrate the upper leaves than the red and blue photons. From the photosynthetic pigments in higher plants chlorophyll is crucial for plant growth. Dissolved chlorophyll aand babsorb maximally in the red (λ600–700 nm) and blue (λ400–500 nm) regions of the spectrum and not as easily in the green (λ500–600 nm) region. Up to 80% of all green light is thought to be transmitted through the chloroplast (Terashima et al., 2009) and this allows more green photons to pass deeper into the leaf mesophyll layer than red and blue photons. When green light is scattered in the vertical leaf profile its journey is lengthened and therefore photons have a higher chance of hitting and being absorbed by chloroplasts on their passage through the leaf to the lower leaves of the plant.

Photons of PPFD (photosynthetic photon flux density) are captured by chlorophyll causing an excitation of an electron to enter a higher energy state in which the energy is immediately passed on to the neighboring chlorophyll molecule by resonance transfer or released to the electron transport chain (PSII and PSI). Despite the low extinction coefficient of chlorophyll in the green 500–600 nm region it needs to be noted that the absorbance can be significant if the pigment (chlorophyll) concentration in the leaf is high enough.

The research available clearly shows that plants use green wavelengths to promote higher biomass and yield (photosynthetic activity), and that it is a crucial signal for long-term developmental and short-term dynamic acclimation (Blue:Green ratio) to the environment. It should not be dismissed but studied more because it brings more opportunities to control plant gene expression and physiology in plant production.