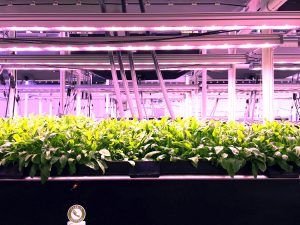 Harvest Urban Farms, a major vertical farm in Vancouver, Canada, starts shipping produce grown under Valoya LED lights. Valoya was selected as light supplier due to the superior performance of the lights and the dedicated support and know-how of the Valoya team.

Harvest Urban Farms launched its first urban vertical farm, in April 2016, at 950 Cordova, in central Vancouver. The farm, which is the first phase of an even larger vertical farm operation, provides Vancouver restaurants and grocery stores with fresh, locally-grown produce year round. The leafy greens and other vegetables are grown without the use of pesticides or herbicides, using ultra-efficient LED lights and water recycling technology.

Aaron Ferguson, the CEO of Harvest Urban Farms comments: “Our aeroponic and closed-loop growing technology makes us one of the most water efficient plant producers in the world. We wanted to have ultra-efficient LED lights to meet the highest requirements to go with our own aeroponic technology, and after a rigorous evaluation of different lights, Valoya was the clear and natural choice for us. Valoya lights have superior performance and that’s very important, but the service, know-how and dedication to provide the best solution to use was truly amazing.”

Lars Aikala, the CEO of Valoya explains further; “Harvest Urban Farms is the largest vertical farm project we have done so far and it is likely to be one of the largest, already operational, farms in the world too. Aaron and Michael Berrutti (VP Operations at Harvest Urban Farms) have created a uniquely efficient and highly scalable plant production facility. Their know-how goes far beyond technology, which you can see in their great selection of produce, which includes a salad mix containing over 30 different varieties of leafy greens.