Since its entrance to the LED grow lights market in 2009 Valoya has been dedicated to producing the highest quality horticultural LED lights for its customers which include 8 out of 10 world’s largest agricultural companies. Countless crop science companies, research institutes, universities, vertical farms etc are equipped with Valoya’s existing series (L, C, B and R). The range is now complemented with a new a line that brings significant improvements and pushes the LED grow lights industry forward.

The BX-Series is the next evolution step of the existing B-Series, the high intensity bar shaped luminaires widely used in growth chambers and similar applications demanding high light intensity. With the intensity of up to 2,1 µmol/W and a dimming feature these luminaires can produce the micromole output for the widest range of plants. The spectra include Valoya’s already available, patented wide-spectra such as NS1 (sunlight spectrum widely used in research) and AP673L (vegetative growth spectrum, widely used by vertical farmers and other growers). These adhere to Valoya’s Spectrum Quality Standards which define the permitted wavelength variations among production batches as well as over time of the fixtures’ usable life. This is a quality guarantee for researchers and growers ensuring them that the spectrum will remain consistent with minimal variation over a long period of time as well as when they acquire luminaires produced in more recent batches. The BX-Series, like all Valoya products, has been designed with GMP compliant production facilities in mind. 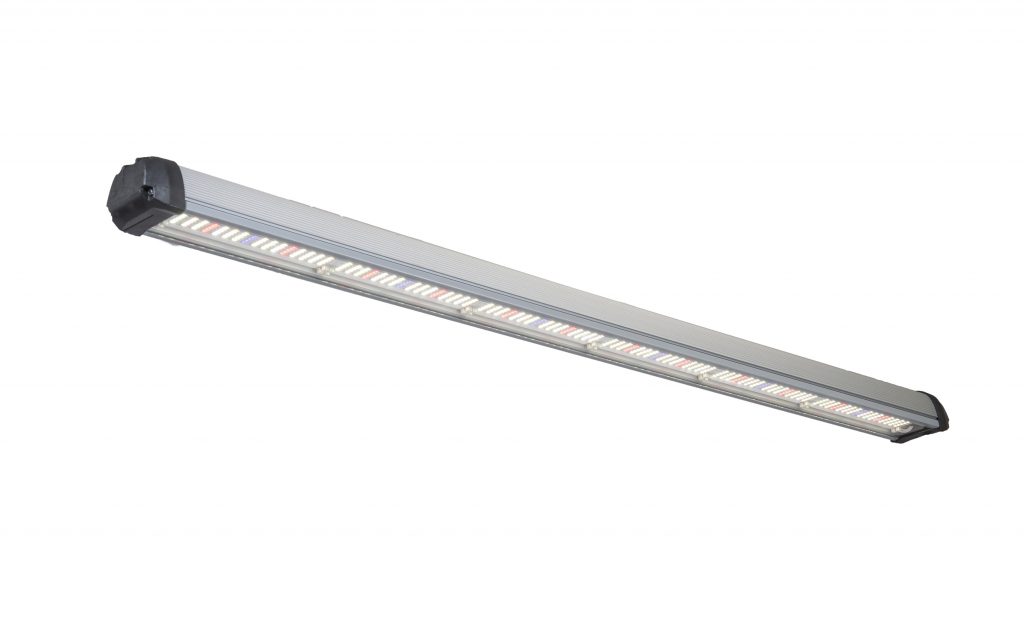 Boasting an Ingress Protection rating of IP67 the BX-Series is entirely dust and humidity resistant and can even withstand water submersion. These fixtures are passively cooled without fins thus they do not accumulate dirt over time and can be easily cleaned and if needed sterilized with harsh chemicals like peroxide, alcohol etc. Another innovation that the BX-Series brings are the GORE-TEX components in its end-caps that push the hot air and moisture out of the luminaire preventing condensation and overheating. This means the luminaires can function in high temperatures (up to 40°C / 104°F) and thus the LED chips inside last longer than in a typical LED grow light. Furthermore, their high Impact Protection (IK) rating (IK08) makes them robust and allows them to keep functioning consistently even when getting dropped or hit. All of this comes in an only 2,6 kg / 5.7 lb heavy luminaire that consumes 132 Watts (model BX120).

These are heavy duty, research grade luminaires designed to produce high and uniform light output over a long period of time. Combined with Valoya’s patented spectra and the support of a team of photobiologists, BX-Series is a smart choice of LED grow lights.

To learn more about the BX-Series, please download the brochure.