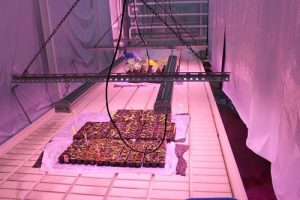 Saskatoons and cloudberries rooting under Valoya AP67 (all pictures by MTT).

Differences in cloudberry seedlings quality were largest between the growth substrates, but some differences between light treatments were also observed, please see the graph below. 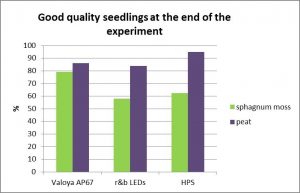 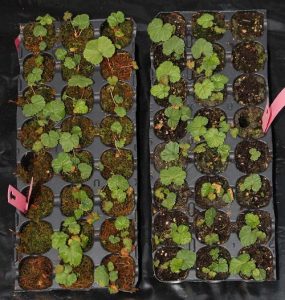 On left cloudberry seedlings grown in sphagnum moss, on right in peat, both under Valoya AP67.
Survival of the saskatoon seedlings was low, regardless of light treatment or growth substrate, hence no conclusions were made based on this experiment.
Concerning plums, differences in the number of leaves and fresh weight were subtle between the light treatments. Under red&blue LEDs the seedlings were shortest. Researchers concluded that choice of appropriate light quality depends on the target: After the rooting and adaptation phase the number of survived seedlings was highest under Valoya AP67, and plants clearly benefitted from the lower temperature in the plastic growth cubicle, but during the last weeks of continued growing period the plants seemed to benefit from the directional heat emitted by the HPS lights. If formation of side shoots of small seedlings after the adaptation phase is considered to be less desirable, under Valoya AP67 the number of side shoots was lowest and under HPS the number of side shoots was highest. 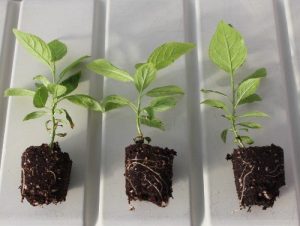