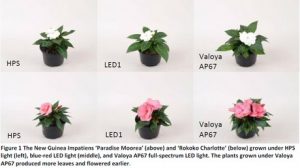 The Valoya AP67 light, which drives both vegetative growth and enhanced flowering, outshined in the flower experiments conducted in Geisenheim”, states Valoya in a news release. The Valoya AP67 light spectrum was tested together with other light sources with regard to their ability to produce biomass and induce flowering of geranium, petunia, new guinea impatiens, and begonia. The plants were grown in greenhouse conditions with supplementary light during the winter. The other light sources in the trial were High Pressure Sodium (HPS, Son-T) lights and narrow spectrum red-blue LEDs from another manufacturer.

Plant development under Valoya AP67 light was best in terms of growing a marketable pot flower. In the test, the number of leaves under Valoya light, increased and flowering was enhanced. The superior flowering results were a combination of earlier flower induction and increased number of flowers compared to the other light sources. Valoya AP67 light shortened the time to crop for various pot plants; petunias grown under red-blue LEDs had only one flower by the time the petunias grown under Valoya AP67 had 12 flowers. (Figure 2)   Hence, with Valoya lights considerable energy savings can be achieved not only by lower W/m2 installations but through shorter crop cycles.