Lighting Approaches to Speed up the Generation Turnover

The development of new plant varieties with advanced performance or an improved environmental adaptation is important to secure our food. To obtain new genetic recombinants or to introduce one or multiple target genes, plants need to be pollinated in a controlled way and seeds must be collected – best as fast as possible to keep up with customers and market requirements.

Many environmental factors influence the time to anthesis. By increasing the temperature and / or limiting water and nutrient availability and space of rhizosphere, plants are promoted to flower induction and following a faster bloom is obtained. Further, a closer look how light supports a reduction of the time to anthesis through the red and far-red light absorbing phytochromes.

In many plant species flowering response is controlled by the photoperiod or rather the length of an uninterrupted dark period (Lopez 2009). Most of our field crops such as wheat, barley, potato and oilseed rape flower under long day (LD) conditions, requiring photoperiods above a critical day length of 14-16h. The photoperiod (circadian clock) is sensed in the leaves by primary the phytochrome system. Different photoreceptors are identified to be involved. In wheat, phytochrome C (PHYC) accelerates flowering under inductive (LD) conditions and acts as repressor under non-inductive (SD) conditions (Chen et al. 2014). Phytochrome B (PHYB) in potato is involved in tuber initiation as a function of photoperiod (Sarkar 2010). Only in some plants such as Arabidopsis blue light receptors (chryptochromes) play a role in the photoperiodic response.

Exploiting the limits of photoperiodism for LD plants Watson and Ghosh et al. (2017) published a novel method named “speed breeding” providing a 22h day (only 2h dark), to accelerate generation cycles in growth rooms and greenhouses. Supplemental light was provided using Valoya NS1 spectrum and additional far-red. Under the prolonged photoperiod 6 generations per year were obtained for spring types of wheat, barley, durum wheat, chickpea and pea and 4 generations per year for canola. Seed companies and plant breeders may be happy to hear that the effect on seed quality and quantity was similar to the slower/conventional breeding cycles. Further it was possible to show that the phenotype for traits such as loss of awn suppressor, dwarf genes, reduced glaucousness or progression of fusarium could be recapitulated under the speed breeding conditions.

Plants obtain information of their ambient environment through the spectral quality. Photoreceptors sense those signals and mediate responses by adapting the morphology and development. Particularly the red to far-red (R:FR) ratio is reported to control flowering in plants. Shade conditions marked by lowered irradiation of red light result in a decrease of this R:FR ratio. Phytochromes sensing low R:FR conditions mediate shade avoidance responses characterized by elongated internodes and a premature flower. For many plant species including Arabidopsis, wheat, barley and grain legumes a low R:FR ratio is reported to reduce the time to anthesis (Croser et al. 2016; Franklin et al. 2003; Ugarte et al. 2010; Deitzer, Hayes, and Jabben 1979). 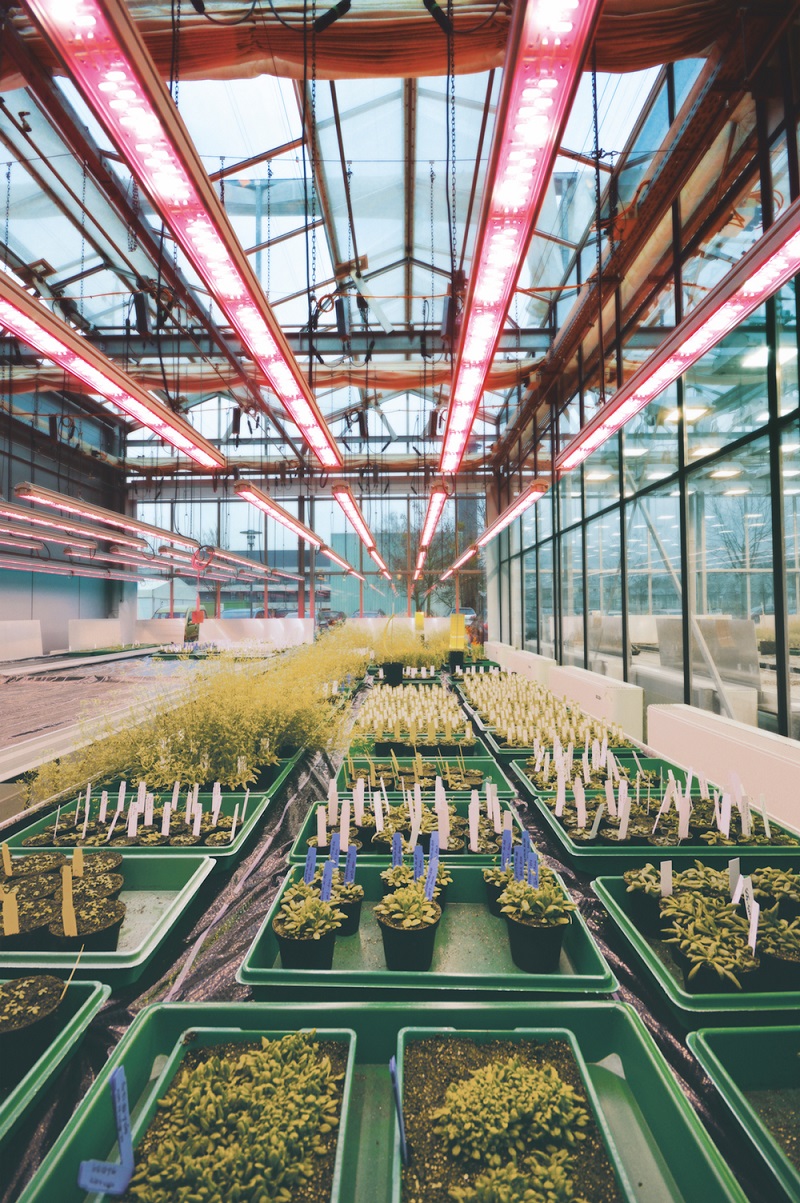 LEDs with an altered spectrum (low R:FR ratio) such as Valoya AP67 are considered as a valuable source for the improvement of protocols targeting accelerated generation cycles. Croser et al. (2014) integrated Valoya AP67 into a novel breeding approach “aSSD” allowing up to 8 generations per year on pea, chickpea, lentil, faba bean and lupin. Furthermore, across all genotypes a near-simultaneous flowering was obtained, beneficial in crossing programs. This indicates, that late flowering genotypes benefit more from a lowed R:FR ratio for the trait time to anthesis as early types.