Valoya’s AP673 spectrum, designed for leafy greens and herbs to maintain plants in their vegetative stage longer, resulting in high number of leaves and larger biomass. This was evident from the results at Geisenheim, where it provided the best growth for parsley and basil. The researchers analyzed the results not only by marketability of the plants, but also from a production cost point of view. The trial included also High Pressure Sodium (HPS/Son-T) lights and narrow spectrum red and blue LED lights.

The plants under Valoya lights were stronger than those under a red-blue LED light source from another manufacturer and under the HPS.

The stems of parsley were noted to be thicker and leaves curlier under Valoya AP673 light, a positive feature with parsley, than those grown under other light sources. Further, researchers evaluated the herbs to have the best overall appearance under the Valoya lights. In addition to good quality and high biomass production, the energy costs per herb pot produced, was significantly lowest with Valoya AP673 (Figure 1). Valoya saved 40-51% of energy compared to HPS, whereas the other narrow red-blue LED light source saved only 11-31% compared to HPS, with same test settings. 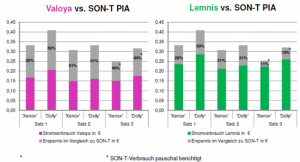 Figure 1 energy consumption was lowest in AP673 compared to other light sources in all three experiments (Satz 1–3). Energy consumption was calculated for parsley ‘Xenox’ and basil ‘Dolly’ as euros spent per pot (Topf). *) 22,75 pots per m2, electricity  price 0,30 €/kWh.

The full report can be found at: http://www.hortigate.de/bericht?nr=58693