Reading Time: 3 minutes
Various lighting technologies such as HPS, LED and fluorescent illuminate the greenhouses and chambers of plant biology research facilities. Researchers are sometimes in need of a spectrum that’s a close match to sunlight in order to generate an outdoor phenotype in their trials, which subsequently increases the validity of these trials’ data. Even finely balanced, white, broad LED spectra are limited in their ability to replicate sunlight. Sunlight varies throughout the day and year, it is different in different geographical locations, and finally weather conditions and the surrounding affect it as well. All these parameters create changes in the light quality, light intensity and photoperiod. For instance, sunlight’s spectrum is rich in far red wavelengths during dawn and dusk and is additionally affected by passing clouds. Artificial illumination is typically used with a ‘hard’ on/off switching or sometimes slowly dimmed on and off, but it still lacks the control of the far red wavelengths which, as research has shown, significantly affect plant growth. Supplementing with additional far red lamps helps but does not enable researchers to easily control the amount of far red in relation to the rest of the spectrum, nor to program it to simulate the natural changes in the far red wavelength. On top of that, replicating passing clouds or lighting conditions on the forrest floor where light is intercepted by the leaf canopy of the trees is impossible.

Valoya, the Finnish LED lighting manufacturer, had solved this issue with its LightDNA® line, developed with Microsoft and launched back in 2015. With it, researchers, control 8 separate LED channels in a single lamp, some of which are wide spectra and some of which invidivual channels for controlling far red or UV-A. Using an online interface, exact amount of far red can be added to the spectral mix and programmed to fade in and fade out during dawn and dusk. With the flickering feature, lighting conditions of the forrest floor can simulated which is illuminated with light that flickered through the trees canopy. Taking it one step further, future development of the technology will enable researchers to upload exact spectrum data they had recorded outside, which the lamp will then replicate with high accuracy. This means being able to recreate dawn and dusk and the entire day in a way that has thus far not been possible. With these and many other features , LightDNA® ushers in a new, highly accurate era of plant biology research. 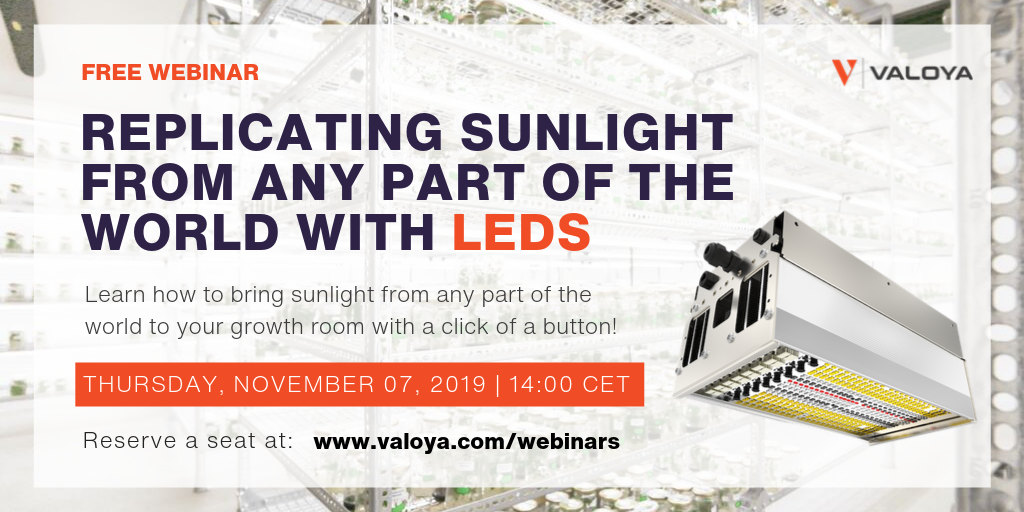 Valoya will be hosting a webinar on LightDNA® on November 7that 2pm, Central European Time. We will demonstrate how the technology works, its various applications in plant biology research as well as how participants can acquire their own LightDNA® luminaires. To reserve your spot at the webinar, please click here.