For many years, it is known that plants require light for growth, but not until the last hundred years with the development of science and technology that the exact effect of light on plants is fully discovered.

In agriculture, the use of artificial lighting seeks to provide a source of light that is similar to sun light. With the innovation of technology, LEDs lights has been the ideal solution for horticultural lighting, especially those ones with customized built spectra. LEDs light marks an advantage in terms of environmental and production efficiency in comparison with traditional used lights (HPS, fluorescents).

In January 2018, Valoya in collaboration with the University of Almeria and Buresinnova has published a study about artificial lighting in agriculture. The study introduces experiments using different spectra and types of light to measure how they can affect plants on different growing purposes and cultivating conditions. An extract from the study is presented below. 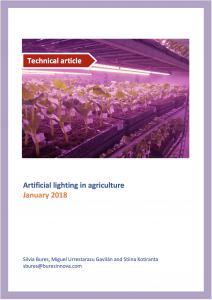 Electromagnetic radiation has a dual nature; radiation propagates as waves, but they exchange energy as particles (photons). It was Albert Einstein who proposed in 1905 for the first time that light has both particle and wave nature. A beam of light includes a set of particles, called photons. Photons corresponding to longer wavelengths (lower frequencies) carry less energy than photons from short wavelength areas.

Human eye captures visible light between 400 and 700 nanometer (nm) wavelength area, which corresponds approximately to the region of the spectrum that plants use for photosynthesis. Light between 400 and 700 nm is therefore referred to as PAR; photosynthetically active radiation. Sunlight has a continuous spectrum within and beyond the visible wavelengths. Human eye transforms different wavelengths into colors in human brain. Short wavelengths close to 400 nm are perceived as blue color and longer wavelengths in the 600nm area are seen as red light. Human eye has the most sensitive region in the yellow-green wavelength area.

Plants absorb the light spectrum in an almost similar range as the human eye, but unlike humans, they absorb best red and blue light.

One of the main molecules enabling plants to absorb light and use its energy to transform water and carbon dioxide into oxygen and complex organic molecules is called chlorophyll and the process is known as photosynthesis. Chlorophyll is a plant pigment found in the intracellular chloroplasts, they are green in color and are in fact responsible of the green coloration of leaves and stems. There are two main types of chlorophyll found in the higher plants; chlorophyll a and b, which differ from each other slightly by their light absorption curves. The small difference allows them to capture different wavelengths, catching more of the sunlight spectrum. Chlorophylls absorb mainly red and blue light and reflect green wavelengths, which is why we see plants green.

However, chlorophyll is not the only plant pigment; the so-called accessory pigments (carotenoids, xanthophylls, etc.) and phenolic substances (flavonoids, anthocyanins, flavones and flavonoids) capture wavelengths other than only red and blue. The accessory pigments are yellow, red and violet in color. These colors attract insects and birds, as well as help protect tissues from environmental stress, such as high light irradiation.

There are also other particles absorbing light; photoreceptors. The main photoreceptor groups are phytochromes, phototropins and cryptochromes. In addition, there is a specific photoreceptor for ultraviolet light; the UVR8. All photoreceptors capture light in different wavelength areas and are responsible of different responses in plants as described below:

In addition to the photosynthesis process which provides energy for biomass production, flowering, seed development, and other functions such as germination, time of flowering and plant morphology are light dependent activities. These actions are highly related to the surrounding light quality from which the plant perceives signals of its environment. These responses are mediated by wavelengths within and beyond the PAR area, including also UV and far-red irradiation. The absorption curves for phytochromes, cryptochrome and chlorophylls are presented in Figure 1. 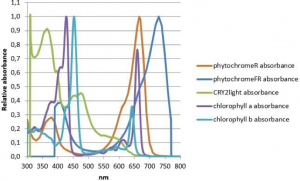